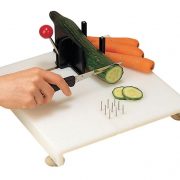 There are over 70,000 Australians living with this condition. 65 years is the average age of diagnosis, although younger individuals can begin showing symptoms, in which the disease is referred to as Young Onset Parkinson’s.

Parkinson’s Disease affects the production of dopamine within the brain that acts as a neurotransmitter and is responsible for passing messages between cells. The disease is caused by the decline in the production of dopamine, resulting in difficulty in controlling movement, and can have a broader impact on other systems including cognition, bowel movements and smell.

Due to the progressive and motor-impairing symptoms of Parkinson’s Disease; tremors, shaking and slowing of movements can change normal, mundane daily living activities into challenging and sometimes daunting tasks. We have selected from our product range items that we believe can assist you or your loved one in overcoming some of the daily challenges presented by Parkinson’s Disease.

Preferred Suppliers for the Healthcare Industry Since 2003

Patient Handling is founded on a sound base of great staff, great products and great partners. We strive to put our clients needs above all else and focus on well thought out solutions for complex needs.

We are an online store only. Please contact us if you would like a product specialist to assist with your purchase.

Choose the items you love and select Zip at checkout

We pay the store, you get the goods, nothing to pay today

Choose how you pay us back over time, interest free

* A $6 monthly account fee applies. Pay your balance by the due date (the end of next month) and we’ll waive the fee. See full Ts & Cs.

Please enter all details in the quote form. Once submitted, you will receive your quote by email. Please ensure you check your junk mail.